Wandsworth Roundabout’s structure targets multiple flows of traffic as it head in and out of London from the affluent South-West. The four digital sign screens deliver more than 200 square meters of digital space, with the screens increasing in size by over 40 percent. The superstructure is visible to over half a million vehicles that pass through one of the busiest junctions in London every week, and is estimated to generate 2.6 million impressions every two weeks (Source: Department for Transport). 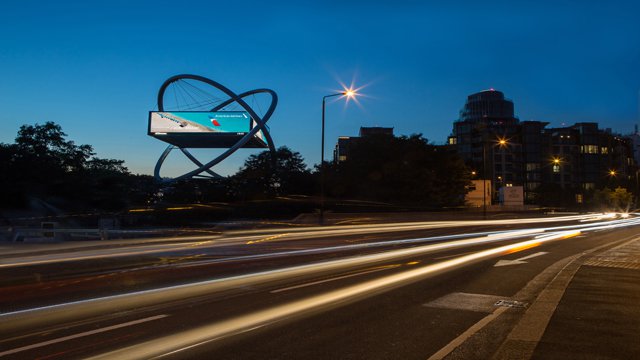 JCDecaux’s says its Smartdata program shows that the Wandsworth Roundabout site has a strong profile among people who take an average of more than four vacations every year. This has made the site a popular location with travel brands, with American Airlines confirmed as one of the launch advertisers, the release said. Other launch partners include Mini, Jaguar, 3 Mobile and Samsung.

«Situated on one of Britain’s busiest junctions, with inbound traffic heading towards Kensington & Chelsea and outbound traffic towards the affluent South-West, Wandsworth Roundabout is one of the UK’s most striking and attractive advertising sites,» said Spencer Berwin, co-CEO for JCDecaux. «With our high-resolution, high-impact digital signage solutions screens in Old Street and Wandsworth, we have now digitised London’s two flagship locations in the East and West, and continue our vision to develop the world’s most advanced Out-of-Home digital media network in London.»

JCDecaux’s South West Network is comprised of 10 locations, which display 18 large premium digital screens in total. Other locations also include Rosslyn Park Tower, the South Bank Tower, the Putney Bridge Showcase, the Wandsworth High Street Showcase and the A3 Fin.