Every so often, I’ll wake up to an inbox full of friendly emails from people volunteering to help me do my job. The specific assistance they are offering is to meet me at some forthcoming restaurant, their stomachs empty and ready to contain at least half the menu covers.

When I get three or four of these volunteers on the same morning, it invariably means that while I was sleeping other people were reading the advance press on an incipient opening that sounds both unusually enticing and intimidatingly expensive.

The most recent rush of volunteers, it turned out, was inspired by the arrival in December of a Manhattan branch of the Beijing-based restaurant DaDong. While the Beijingese have excelled at the art of duck roasting for centuries, DaDong, I learned, is a relative newcomer, founded in the 1990s by the chef Dong Zhenxiang.

At the restaurants — there are 10 in Beijing and six in other Chinese cities, not counting casual spinoffs — the birds revolve, a dozen at a time, inside a circular wood-fueled oven that Mr. Dong has patented. The result is what some people consider Beijing’s best Peking duck.

This is a magical combination of words. “Beijing’s best Peking duck” suggests a mandatory eating experience in a way that, say, “Russia’s best Russian dressing” does not.

It took me and my first corps of volunteers some time to find one another because the restaurant’s address, 3 Bryant Park, implied that the entrance would be somewhere around Bryant Park.

DaDong is inside a stack of glass-and-steel blocks that has somehow been plunked down west of the park between 42nd and 41st Streets, beside a pocket plaza that was new to me, although the skateboarders seemed to know all about it. 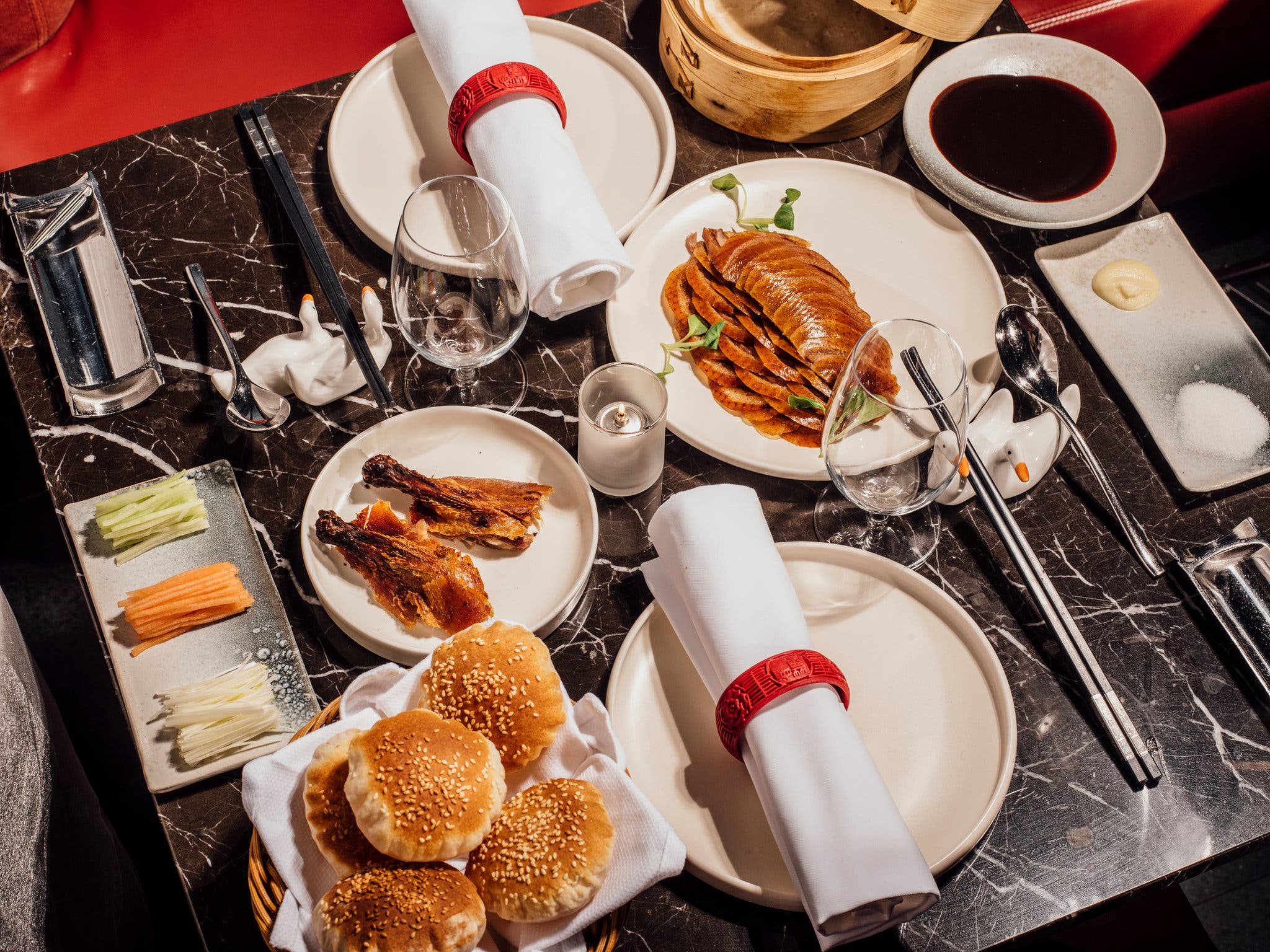 Inside the front door was a lobby where a host stood by herself behind a desk made out of a rock. I gave her the name and she gestured toward the elevators, sending me up to the dining room on the second floor.

This space, designed by the hotel specialist George Wong, is the latest manifestation of modern China in Manhattan, a soothing study in straight lines and neutral tones with random outbreaks of contemporary Chinese art. A wraparound bar sits in the middle of the room under a hanging sculpture that looks like a flock of gold paper-towel tubes learning to fly.

In this room, it is not exactly shocking to learn that the usual Peking duck garnishes may be supplemented with 10 grams of caviar for $42. In lieu of toast points, servers recommend a shard of skin.

If you skip the fish eggs, they will tell you there are three ways to eat the duck: wrapped in one of the very thin and tender pancakes with scallions and a smear of sweet soy-black bean sauce (great stuff); poked into a round sesame puff with julienned cucumber and melon, raw garlic paste and the black bean sauce; and finally, dipped in a small pile of sugar, recommended for the skin alone.

This kept everybody busy for some time. The bird was precisely carved, as if by a laser. None of us had seen crisper skin — you could bounce a quarter off it. The dip didn’t improve it, but it is always nice to find a new use for sugar.

The meat didn’t make as firm an impression. It made very little impression at all, apart from my strong sense that there ought to have been more of it. Tasted on its own, it reminded me a bit of the lean, whitish, noncommittal supermarket pork chops I grew up on.

Slowly, gradually, with great mental resistance but still inexorably, it dawned on me that I had paid $98 for a duck with almost no flavor.

New York City being a lush jungle of regulations, DaDong was forced to convert its wood-burning ovens to gas. Smoke might have added some flavor, but something seems to be lacking in the birds themselves, members of the Pekin breed raised on a farm in Indiana with special instructions to keep them lean, the way Mr. Dong prefers them.

Unfortunately, DaDong’s problems don’t end with the duck. The leather menu covers in New York has been trimmed down considerably from the 280-page book presented to diners in Beijing, but it is still rife with dishes that are dead on arrival.

Kung pao shrimp with beet coins and raw mushrooms tasted like ketchup. Sweet-and-sour pork ribs with preserved plums were as sweet as if they’d been stewed in Dr Pepper, and a dusting of powdered sugar at the table didn’t help.

Little teepees of Ibérico ham came wrapped around cold, dry wads of sticky rice. Champagne-glazed tomatoes were sweet enough to serve for dessert, and the “crispy mushroom salad” they were stuffed with wasn’t crisp and didn’t particularly taste like mushrooms.